Amazon are a nasty bunch. They are selling kindles like hot cakes to the masses and the masses are buying them thinking that it is in order to read books on them. But the facility to download literature is not what the Kindle is about. It is far more nasty than that! 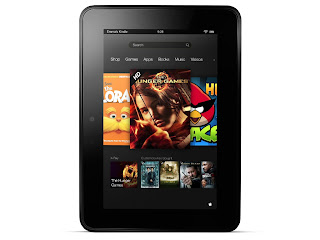 When reading the following bear in mind that Kindles are being given, as presents, to very, very young children on the assumption that it will encourage reading:

Christmas day; little Pete opens his present from granny, whoopee! A Kindle. But what's this? First he must register with amazon which requires an email address. Okay, lets open an email account for the darling little five year old then register with Amazon. Okay done let's now have a look at what Kindle will do....  Oooooh look mummy I can play games on my new present, can I download 'Angry birds'?

Uncle Dave gave little Pete a £25 voucher from Amazon which is credited to his account. Little Pete blows £23.45 on game downloads without the thought of a book. Little Pete is a little too young to read a book let alone realise that he is being conditioned by Amazon!

Uncle Dave looks for books that may be borrowed from the Kindle library (one of the selling points of the thing) but finds he must activate a free trial to the 'Prime' club thing before little Pete can borrow a book. He must provide credit card details among other things in order to take up the free months 'trial' membership. At the end of the month he must remember to terminate the membership otherwise Amazon will be stripping out of the card account nearly £50.00 per annum which is the actual cost of being allowed to borrow 1 book per month. that is not borrowing. That is hiring a book a month at the cost of £4.00 per book. Little Pete and his family are being fleeced.

Meanwhile little Pete, without a single book being downloaded, is playing games like there is no tomorrow and while he is playing games he is being bombarded with pop up ads from Amazon. Ads for all sorts of things useful to Pete such as motorcars and insurance.

This brings us to the central purpose of the Kindle: It is an Amazon shop in your home, marketing amazon products constantly and as they have your card details every purchase is just a click away. It is like living with a pushy salesman 24 hours a day!

By the 1st of January little Pete is doing 8 hours of game playing on his Kindle, Mummy is delighted that he is occupied while she gets pissed on baileys and watches re-runs of sex in the city. She tells Gran: 'It's like having a free nanny'! All the while she is conning herself that little Pete is doing something EDUCATIONAL rather than rapidly acquiring behavioral problems, obesity and long term damage to his hands and wrists.

QUESTION: Why can I not remove  Amazons  'Silk' and 'IMDb' apps from the Kindle thereby making it safe for children?

QUESTION: Why are amazon allowed to push unsuitable products on small children in this way. Why  are they not obliged to market a product designed for kids without the advertising and without the need to register with card details?

Parents, you are paying large sums of money for nothing more than the packaging. The Kindle is the IT equivalent of an empty cornflakes packet which can be filled in future by subscription only.

'SUCKERS' is probably the most frequently used term at Amazon HQ!

IT IS ALSO IMPORTANT TO REMEMBER THAT AMAZON PAY ALMOST NO TAX ON UK SALES...
Posted by Tristan Hazell on January 01, 2013 No comments: